During a lecture at IIM Ahmedabad when someone asked him what his CGPA was as a student, this was his prompt retort: “I learnt this very early in my childhood. Remember the good, forget the bad.” It is this quick wit and spontaneous oratory which has made him a household name in India and even across the world of cricket. His reputation is such that he would arguably be Rediffusion’s most famous alumni ever!

Meet the one and only Harsha Bhogle, who has, perhaps single-handedly, turned watching cricket into that insightful-yet-casual, serious-yet-light-hearted, emotional-yet-intellectual and awesome experience that it is today.

The one who was profound enough to remark that “there is no better unscripted drama than live sports.” Or observant enough to point out that an “eruption of joy at the fall of an Indian wicket can only mean one thing” and that is, a certain Sachin Ramesh Tendulkar is coming out to bat next. 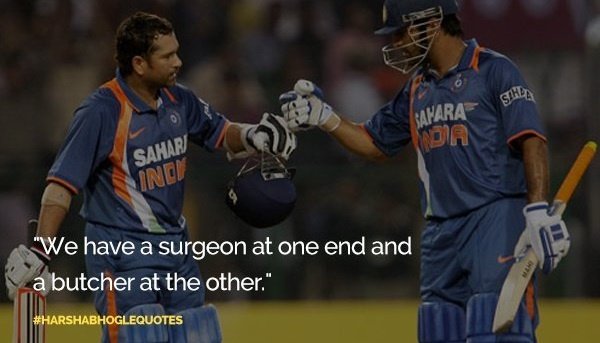 The one who was poetic enough to say that Cheteshwar Pujara is “a classical musician in the era of Yo Yo Honey Singh.”

Or precise enough to once describe an ongoing Sachin-Dhoni partnership as: “We have a surgeon at one end and a butcher at the other.” The one who was patriotic enough to give it back to Sir Geoffrey Boycott who had said that Sachin may be a great batsman but he never got his name at the Lord’s honours boards: “So whose loss is it, Sachin’s or the honours boards?” Or witty enough to comment on Narendra Hirwani’s batting skills by saying: “If you make a team with all the No 11s of all the teams, Hirwani would still come at No. 11 in the line-up”. 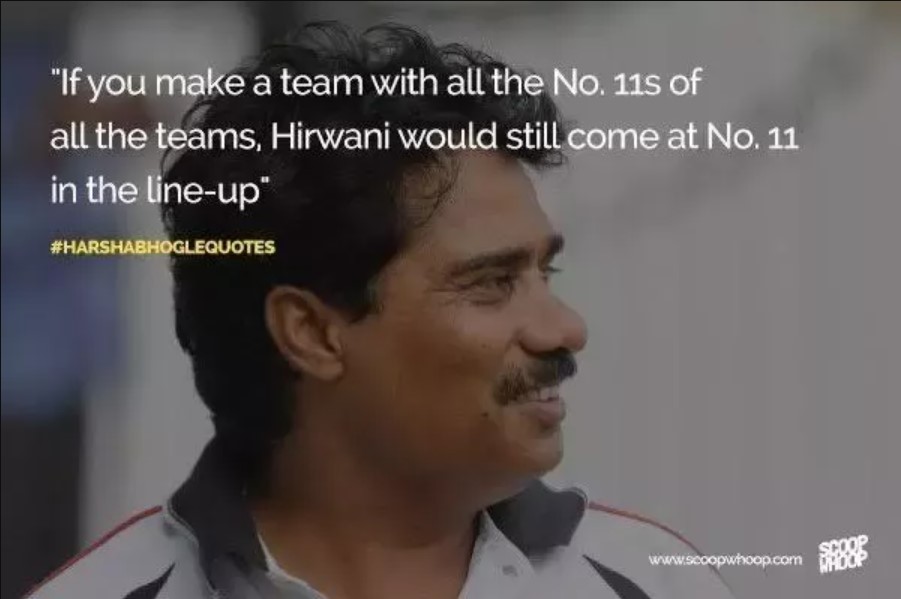 He surely must have been talented and articulate enough to go on to become India’s greatest cricket commentator ever, but by his own admission, it was advertising and his two year stint with Rediffusion from June 1985 to October 1987, that helped him to hone his writing skills and become a far better journalist than he would have ever been if he had come from a news desk background. It was in Rediffusion that he got to work with brilliant minds and creative geniuses like Diwan Arun Nanda, Ajit Balakrishnan, Ashoke Bijapurkar, Ashok Kurien, Kamlesh Pandey, Bugs Bhargava, Anand Halve etc – and he only has nothing but high praise for all of them. The art of story-telling, compelling the reader to read on – these are the tricks that he picked up from Rediffusion and which came immensely handy to him in his career as a cricket writer, because advertising had already taught him the importance of being different from the others and standing out.

And today he does not just stand out but stands tall in the paeans of Indian cricket folklore. Rediffusion was not just his first job, it was his first love as well, the only place he truly, even desperately, wanted to join from campus (he was so desperate that he even flubbed his campus Rediff interview). Such was his love for Rediffusion that he would look at key numbers of all ads and swears that he could just look at an ad and tell whether it was a Rediffusion ad (the metaphorist in him pipes up: “It is like listening to a tune and recognising whether it is OP Nayyar’s or Madan Mohan’s”).

Harsha Bhogle, Rockstar Rediffusionist, we salute you and are proud to induct you into our very own Hall of Fame. May you deal in boundaries and sixes and pull a fast one every now and then, as you continue to spread joy amongst cricket lovers around the world…

In a freewheeling chat with Navonil Chatterjee and Harish Mishra, Harsha Bhogle talks about his Rediffusion experience.

It was just 2 years that he spent at Rediffusion. But those 2 years were so full of learning, memories, people, events and anecdotes, that he seemed to remember each of those experiences as vividly as if they were of yesterday. Although truth be told, they were of a time and era that was almost 3 and a half decades ago! Excerpts from the chat…

“My first job, straight out of campus”
Rediffusion was the only agency I wanted to work in. I remember my colleagues from campus had applied on an average to 15-20 companies, while I just applied to 3 or 4. I used to follow ads very closely, and used to specially look out for the Rediffusion key number under the ad.

“I wanted the Rediff job so desperately that I flubbed my interview big time”
When you desperately want something, you get tense. I wanted this job so badly that I messed up my Rediff interview. I had given up hope but then I got a call – ‘Placement Office mein bulaya hai aap ko’. There, Ashoke Bijapurkar told me: “We will be giving you the job, but you will have to promise me one thing – that you will never give an interview so bad ever again!” And that’s how I landed my dream job.

On Arun Nanda …
When I joined, I remember Mr. Arun Nanda taking us around the office. There was a small room where the copywriters sat. And there was another room for art directors. The people who were there at Rediff that time – Kamlesh Pandey, Bugs Bhargava, Arun Kale …I remember Mr Nanda telling us that these are people whom we have got from other agencies, but they do better work at Rediffusion than anywhere else because of the environment we created here. And this is something that I have gone on to observe with cricket teams too, later in my career. Teams that do well are where there is a good environment nurtured, where there is no room for insecurity, and players don’t have to worry about their performances. And that’s the kind of team and environment that Mr Nanda created. The other thing about Mr Nanda was that the clients usually listened to whatever he said.

On Ajit Balakrishnan …
I remember seeing Ajit during my placement interview. He was wearing a round neck T-shirt and I thought this must be a cool place to work in. He once came for a Colgate meeting where we presented a campaign which the client for some reason did not like. And Ajit said: “Ok we will come back to you.” No carrying or presenting of options! Those were the days when we usually presented just 1 campaign to the client. The thinking was, just like the client knew its product, the agency knew how the advertising of that product ought to be! I also remember his pithy, incisive comment after we showed him the Kapil Dev-starrer ‘Palmolive da jawab nahin’ ad: “You’ve taken a rustic, high energy performer and put him somewhere else.” How these people could immediately cut to the chase!

The People at Rediff
There were characters there, a core group of loyalists who were there for a long time and understood the Rediffusion legacy. Quite a lot of them had IIM roots. Ashoke Bijapurkar used to take our ASPM course and I used to badger him continuously. Ashok Kurien … how he sold creative …they were all tigers there.

The Tendulkar before ‘the’ Tendulkar
It was in Rediff, that he first met Tendulkar. No, not God. Not that one. This was Prabhakar Tendulkar, the Studio Manager then at Rediffusion. And this Tendulkar too, taught him a thing or two. About artworks, masters etc! 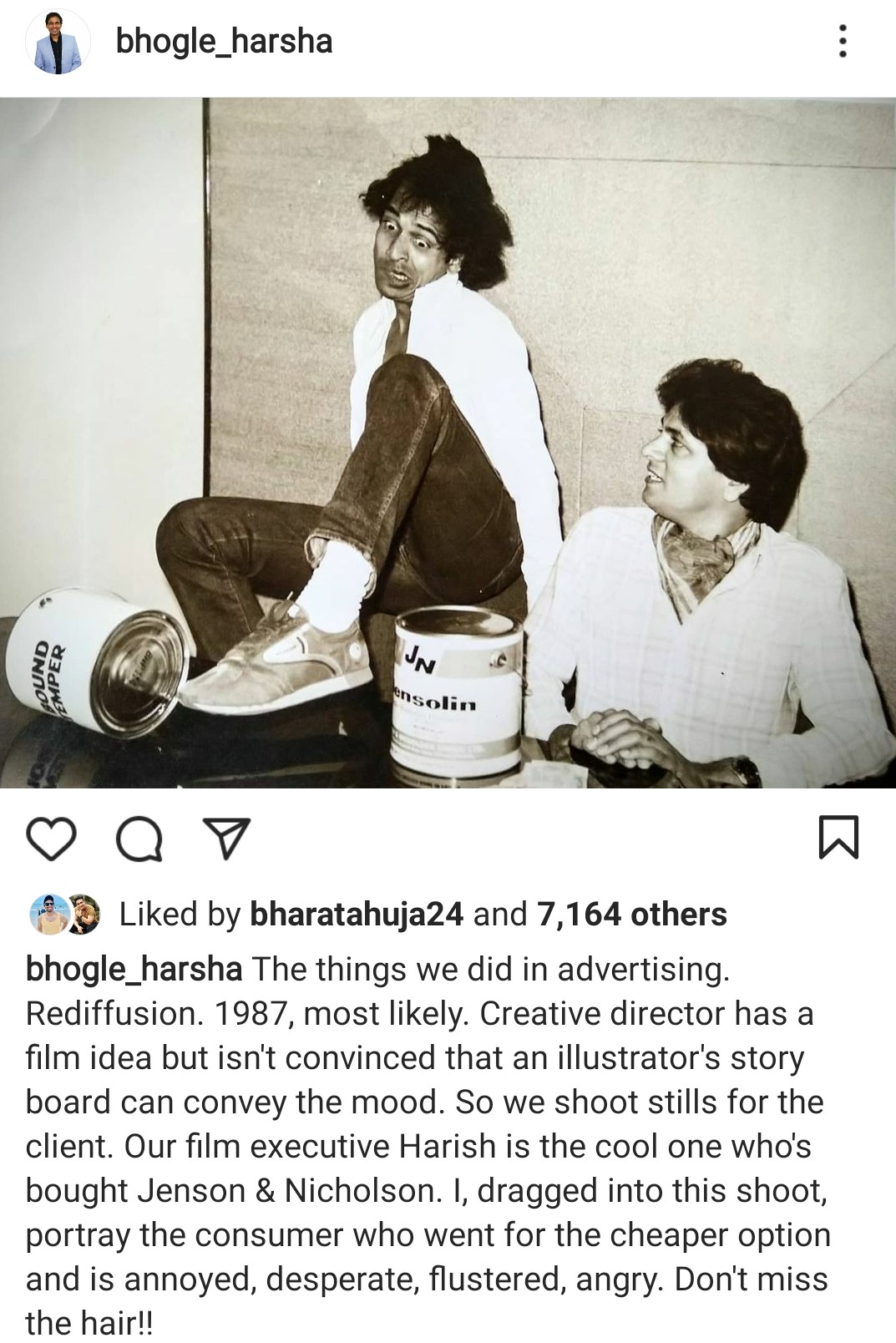 On Being an AE (Account Executive) at Rediffusion
AEs had to do everything those days. From meeting clients, getting the brief, doing the competition scan, writing the creative brief, briefing creatives, selling the creative to the client (creative people seldom ever sold their campaigns those days), doing media planning (we only had media ops people then, no media planners), carrying model pictures to the client, getting artwork ready, transparencies, production planning, colour separation, estimates, billing, maintaining guard books… the works. I also knew that with the quality of people around me, I was correct at whatever I did. I learnt more about advertising in those 2 years than I ever did at any other point of time.

On the Rediff Stint Helping Him in his Future Career
in Rediffusion and working with creative people helped me in writing about cricket. If I had worked for PTI, I would have been a boring writer. I started off in MidDay where I had to report on stories that were already covered by the morning papers! I had to do something different. Also, I realised that the reader was under no obligation to read my article till the end. Beyond a doubt, advertising influenced my writing.

When He Was Roped in to Enact a Storyboard …
Kamlesh Pandey had cracked an ad about an expensive Jenson & Nicholson distemper, where he wanted to show 2 people – the smart and suave guy who bought the expensive distemper and the ragged and stupid guy who bought the ‘sasta’ paint. And Kamlesh felt that a storyboard won’t be enough; instead we should enact the storyboard. No prizes for guessing that while Harish Mishra got to play the smart, suave guy, yours truly had to be the choice for playing the torn-shirt-ragged-hair-sasta-paint-buying guy!